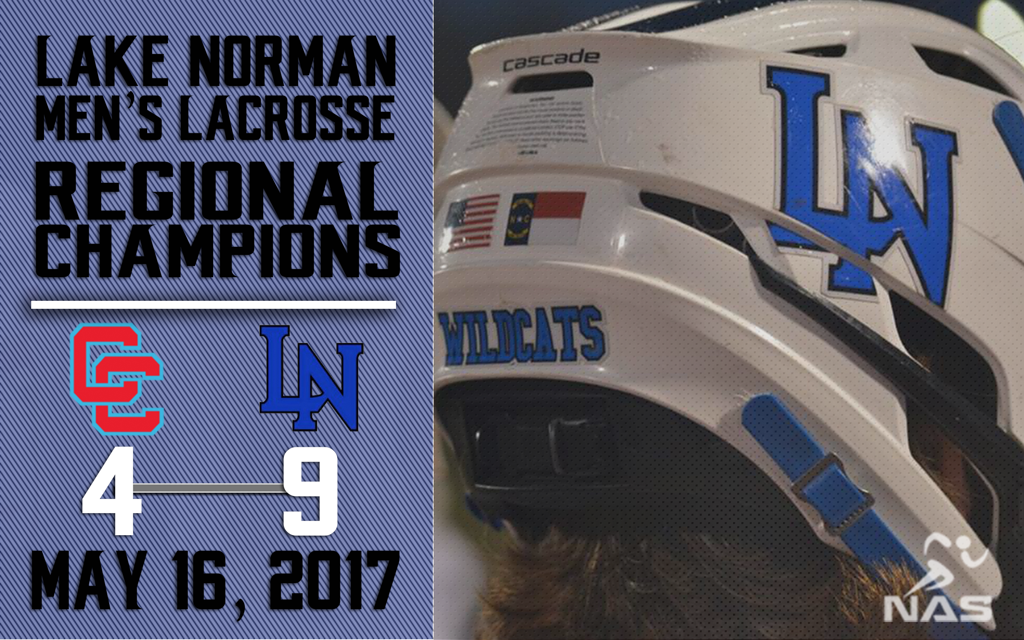 Lake Norman will face off against Middle Creek in the NCHSAA 4A Men's Lacrosse State Championship after defeating Charlotte Catholic 9-4 in the West Regional Championship.

The Wildcats have taken the momentum they've built during their strong regular season through the playoffs and into the State Championship.

Lake Norman came out guns ablaze against Charlotte Catholic, scoring 5 unanswered goals in the first quarter. They had to shoulder a strong response by Catholic in the second quarter and entered halftime up 6-3.

From halftime on, the Lake Norman locked in defensively to seal the victory for the Wildcats. James Jacubowski, Isaac Kaufman, Grayson Baker, and Brandon Garcia provided stout defensive play in midfield.

James Brugger, Christian Nell, Sean Riley, and Ryan Swarts sured up the team at the back. Ben Belding won 10 of 17 faceoffs to add to Lake Norman's fantastic defensive play.

But victory would not have been possible without great goalkeeping by Ricky Bokavich. Bokavich made 12 saves on 16 shots on goal.

Junior Mitchell Cody lead the scoring with 4 goals. Freshman, Tucker Goodelle scored two of his own and Ryan Caplis, Blake Lecky, and Matthew Elder each scored one.

Lake Norman will face off against Middle Creek on Saturday, May 20th after the women's championship game (appx. 3:00 pm). The game will be held at the Wake Med Soccer Complex in Cary, NC. Tickets can be purchased at the gate the day of the game.

Down 3-1 after the first quarter, Lake Norman needed to turn things around on both sides of the field. They came out in the second quarter with newfound inspiration, scoring 6 unanswered goals before halftime to go in 7-3. They continued with this momentum through the second half until the end of the game.

The attacking play was bolstered by a solid defense, lead by Senior captain, James Brugger, as well as Christian Nell, Sean Riley, and Brandon Garcia.

Goalkeeper Ricky Bokavich had 10 saves on the game and Junior, Ben Belding won an impressive 17 out of 22 faceoffs. He also provided an assist.

Lake Norman edged Ardrey Kell in a thrilling game in the third round of the NCHSAA Playoffs which saw the Wildcats down by 3 goals with 6 minutes to go.

In crunch time Lake Norman were able to rely on their captain, James Brugger, who held his man to zero points.

Goalkeeper Ricky Bokavich was also inspired on the day, saving 20 of Ardrey Kell's 29 shots on goal in the game.

This defensive formidability gave the midfield and attack the space needed to get back into the game. The goals came evenly throughout attack and midfield.

Lake Norman entered the NCHSAA Quarter-Final game strong, ending the first quarter up 4-1. They continued to hold this lead for the remainder of this game to advance to the semi-finals.

The defense was able to fend off most of Reynold's attack with Brugger, Riley, Nell, Garcia, Kaufman, and Jacubowski all putting in a great shift.

Goalkeeper Ricky Bokavich had 11 saves from Reynolds' 17 shots on goal. Ben Belding won 10 of his 20 faceoffs.